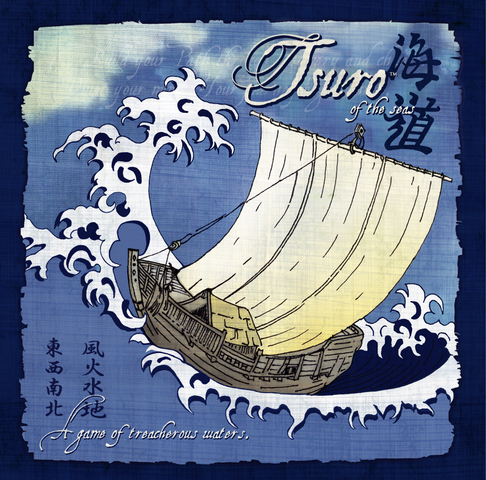 Tsuro of the Seas

The basic game play of Tsuro of the Seas resembles that of Tom McMurchie's Tsuro: Players each have a ship that they want to sail — that is, keep on the game board — as long as possible. Whoever stays on the board the longest wins the game.

Each turn players add "wake" tiles to the 7×7 game board; each tile has two "wake connections" on each edge, and as the tiles are placed on the board, they create a connected network of paths. If a wake is placed in front of a ship, that ship then sails to the end of the wake. If the ship goes off the board, that player is out of the game.

What's new in Tsuro of the Seas are daikaiju tiles, representing sea monsters and other creatures of the deep. On the active player's turn, he rolls two six-sided dice; on a sum of 6, 7, or 8, the daikaiju will move, while on any other sum they'll stay in place. To determine which direction the daikaiju tiles move, the player then rolls one die. On 1-5, the tile either rotates or moves in a specific direction. On a 6, a new daikaiju tile is added to the board.

If a daikaiju tile hits a wake tile, a ship, or another daikaiju tile, the object hit is removed from the game. Another way to be ousted! The more daikaiju tiles on the game board, the faster players will find themselves trying to breathe water...