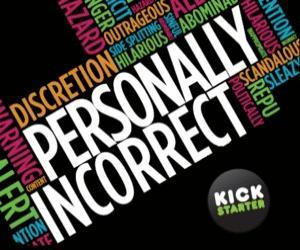 Personally Incorrect is the appropriatly inappropriate party game that will make you hate what you think and love what you play.

The player with the most'Question' cards at the end of the 10th round is the winner. Players begin the game with 10 'Answer' cards, and recieve a new one each turn. Every turn a player will read a 'Question' card alloud submitting another player's name into the "Insert Name" quotations. The rest of the players will simutaniously select answers and submit them to the player who read the question.

The active player now shuffles all of the answer cards together and reveals them 1 at a time. All of the other players present quickly vote for the most appropriately inappropriate answer. It is important to vote quickly as the last vote will not count that way players don't base their vote on another player's vote. In the event of a tie, the active player/reader is allowed to cast their vote in order to break the tie. The player whose answer recieved the most vote now claims the question card, ending the round.

At the end of 10 rounds the player with the most question cards is the winner.